So I am I bit of a bread snob and won’t eat it if it’s the dry, stale, old store bought kind that has no taste. It’s just not worth it to me! Especially after I found out how EASY it is to make your own. If you have around 3-4 hrs a week, you should never be buying that store bought stuff! So delicious homemade!

Now with that being said, I’ve been making it for about a year and a half weekly, and sometimes it just doesn’t turn out! That’s just part of bread making. DON’T GIVE UP!! You have to keep trying and keep going!

I thought I would give picture tips of what bread making looks like. I like to use my kitchen aide but dream of having a Bosch one day haha. I also like a kitchen scale and USA bread pans. And again if at first you don’t succeed, try and try again!! 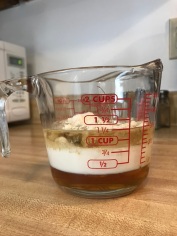 So I like to start with adding my sugar, yeast and water together in a bowl and allow it to bubble up. Then in a liquid measuring cup I add all the rest of the ingredients except the flour, so that way I know that I haven’t forgotten anything! Which has happen more than once with the salt…always a bummer! haha Another tip is to spray the bowl you are going to use to raise the dough in and also cover it with a cling wrap.

This is what it should look like when it has enough flour to pull it off the bottom and sides of the bowl.

This is what it should feel like, sticky but not a lot stays on your hands. 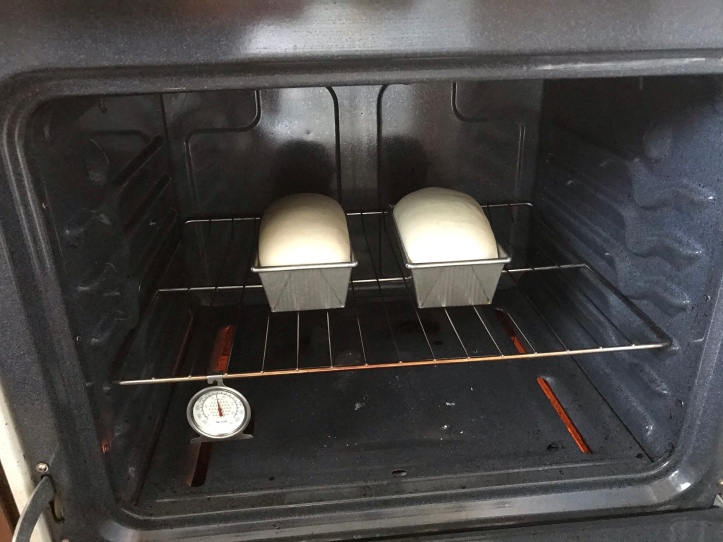 I recently got an oven thermometer and found out that my oven ran 75 degrees hotter than it should!!! Haha no wonder nothing was baking properly! So consider getting one to check your oven. I allow my loaves raise until about 1″ above the pan.